DVD Fab Cinavia RemovalIs a Chinese software vendor  DVDFab SoftwareCopy guard included in audio developed by (formerly Fengtao Software) Cinavia When you activate the product, not an app that runs standalone (standalone) with a module that removes DVD Fab Copy / Rip / Convert Cinavia detected in can be removed.

DVDFab Cinavia Removal can not remove all Cinavia,Supported titles Can only be removed.

Cinavia is a technology that embeds a watermark in voice, which is inaudible to the human ear. Inaudible code Since 2012, DRM (Digital Rights Management), including Cinavia detection, will be implemented on all consumer Blu-ray players, except for devices specified by the Cinavia code. Cannot play normally.

Cinavia was used to prevent direct shots by camcorders in movie theaters and copy protection that circumvents Blu-ray AACS, but is now used in some DVD / Blu-ray / UHD Blu-ray titles. In many cases, it is limited to discs for the United States, and the impact of Cinavia is limited in Japan.

CPU: Intel Core 2 Quad or above
RAM: 2 GB or more
Graphics: NVIDIA GeForce GTX 260 and above

DVDFab Cinavia Removal The  DVDFab 12 Because it is a module ofDVDFab 12 All-in-one To install.

See below for installation instructions

How to use DVDFab Cinavia Removal

DVDFab Cinavia Removal When activated DVD Fab copy , DVD Fab ripping When it becomes available in and a removable Cinavia is detected, the Cinavia icon will be displayed in the voice.

If you want to remove Cinavia  Chapter selection-Copy voice profile / Passthrough-Video cropping Is not available. 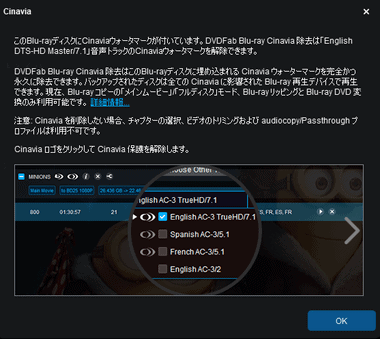 DVDFab Cinavia Removal When Cinavia is detected that can be removed by, the information of the audio track protected by Cinavia is displayed.

This disc is Cinavia protected.The backed up disc cannot be played on a player like the PS3.Play the playback device on a device that does not detect Cinavia.Is displayed Cinavia cannot be removed. 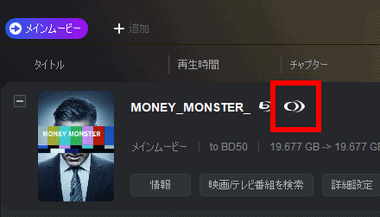 If Cinavia is detected regardless of whether it can be removed, an icon will be displayed in the title part. 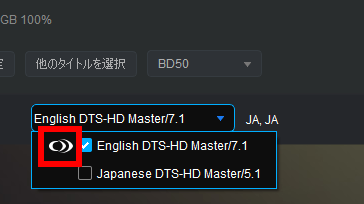 Cinavia that can be removed will have an icon at the beginning of the audio track. 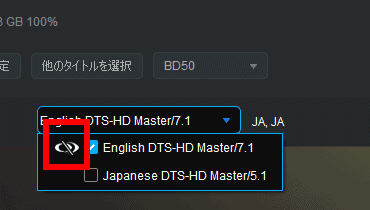 To remove Cinavia, click the icon to put "\" in it.

When output, it will be in the process Removing Cinavia in progress… Is included and Cinavia removal is performed.

How to Buy DVDFab Cinavia Removal 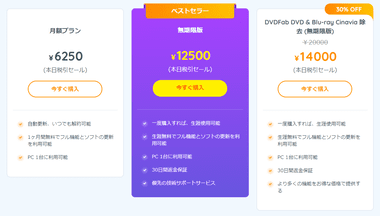 Click "Buy Now" in the plan you want to purchase to proceed with the purchase procedure.

The indefinite version may be on sale Campaign page confirm.
After paying with a credit card, register as a member of DVDFab and activate the product with the registered email address and password.

Install and use StreamFab for Android