DVDFab PassKey Is a Chinese software vendor Fengtao Software It is a utility software developed by the company that removes the protection of DVD / Blu-ray / UHD Blu-ray that resides in the system tray and is set in the drive.PassKey for DVD Then, Japan's unique copy guard Release CPRMAlso supported.

A Blu-ray that is a copy of a terrestrial digital program recorded using a Blu-ray recorder isBDAV Because of the standard (Blu-ray Disc Audio / Visual), how to remove the protection of the disc DVDFab PassKey for Recorder Is necessary.

Some copy guards are not supported in the free version.

Not supported by Lite for DVD
UOPs (User Operation Prohibitions) /ARccOS/RipGuard/PTTs/VOBUs/CPRM
UOPs, ARccOS, and RipGuard, which are not supported on the official website, have been released in the test environment, but some adult DVDs cannot be ripped.
Not supported by Lite for Blu-ray
Latest MKV / 4K UHD Blu-ray
DVDFab PassKey is fully functional for a trial period of 30 days from the first startup or up to the maximum number of sheets, and can be used free of charge after either the trial period or the maximum number of sheets. DVDFab PassKey Lite Automatically migrate to.

UHD Blu-ray UHD Friendly driveCan be canceled only with.

DVDFab PassKey To  for DVD-for Blu-ray-for Recorder are provided, but the apps are all the same, you purchase and activate the modules you want to use. 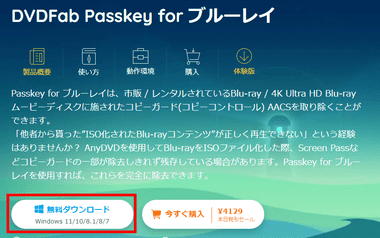 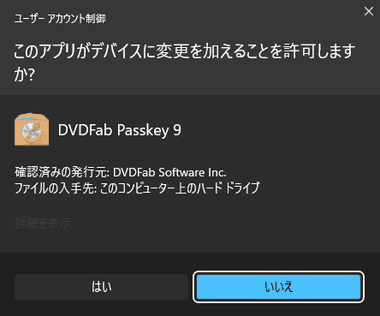 Launch the downloaded installer, and when the User Account Control dialog is displayed, click "Yes" to allow it. 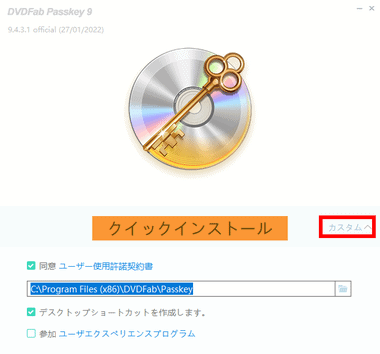 Setup Wizard Custom Click to select the installation destination or create a shortcut to the desktop.

Send usage anonymously User experience programis enabled by default. Disable it if you want to deny it. 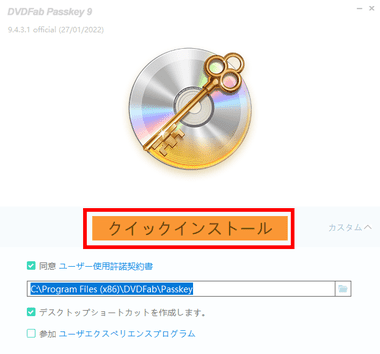 The setting items are Custom Since it is only the part of, click "Quick Install" in the center after setting.

A progress bar appears above the system tray. 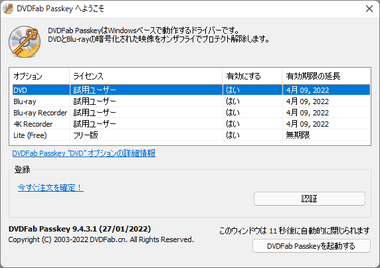 The welcome screen closes automatically, but if you don't need to display it Do not redisplay Check the box and click "Launch DVDFab PassKey".

During the trial period of DVDFab PassKey, all DVD / Blu-ray / Recorder protections are supported regardless of the downloaded application.

In the case of the trial version, a dialog will be displayed. Click "Continue" to enable DVDFab Passkey.

How to use DVDFab PassKey

DVDFab PassKey is a device driver that connects software and hardware, so Effectiveness If it is set to, no operation is required.

Protective technology to watermark voice Cinavia Is not supported, so if you want to unlock Cinavia DVDFab Cinavia Removal See. 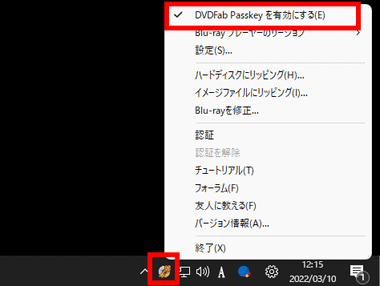 The DVDFab PassKey menu is accessed by opening the context menu (right-click menu) from the icon in the system tray.

By default Enable DVDFab PassKey Is checked and the optical drive is being monitored.

When a copy-protected disc is inserted in the DVD / Blu-ray drive, DVDFab PassKey will automatically start decrypting and the progress bar will close when finished.

Decryption of the copy guard requires an internet connection, and it may take some time to decrypt depending on the server and communication conditions.

DVDFab Passkey Lite If you cannot remove the protection due to the function limitation of Your free Passkey Lite will not be able to open this disc. Message appears. 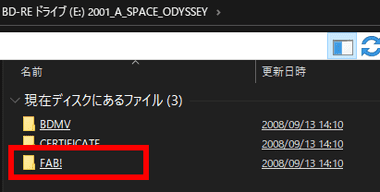 When you open the decrypted disc FAB! A folder is created and can be treated as media without copy protection.

For Blu-ray discs VLC , MPC You can also watch itVSO DVD Converter / VSO Blu-ray Converter , HandBrake It is also possible to rip with.

DVDFab PassKey is an unprotected driver, but it implements ripping to DVD / Blu-ray folders and ISO image files. 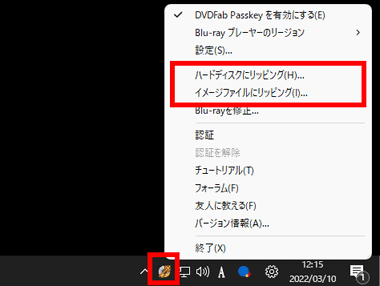 When ripping, after the analysis of the disk is completed, from the context menu Rip to hard disk Or Rip to image file choose. 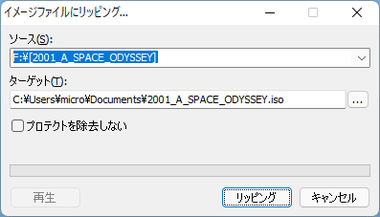 targetSpecify the save destination in and click "Rip" to start the process.

Rip to image file Then. Do not remove protectionBy checking the box, you can output the protected ISO file.

DVDFab PassKey for DVD The CPRM It also has a function to release the video file, so you can easily extract the video file from the DVD on which the terrestrial digital broadcasting is copied.

CPRM (Content Protection for Recordable Media) is a copy guard unique to Japan that is applied when copying recorded terrestrial digital to DVD, and before 2012 when the copyright law was amended.  CPRM Decrypter Free software that removes CPRM was also easily available, but nowadays many of them are used to disguise malware, making it extremely risky to obtain.
Not available on DVDFab Passkey Lite. 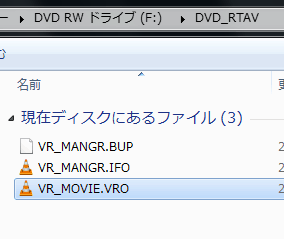 Open the DVD that copied the terrestrial digital broadcasting,VR_MOVIE.VRO A video file in which is recorded. 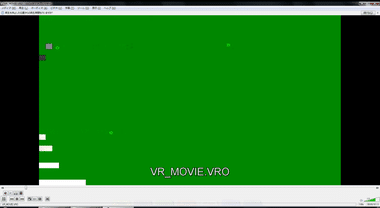 Playback images are crushed in green or gray when played on a device that does not support CPRM, such as a personal computer. 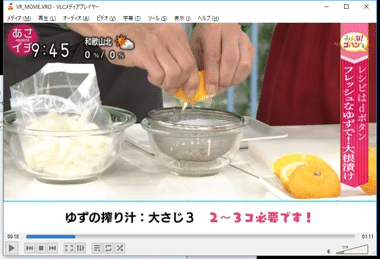 When DVDFab PassKey for DVD is resident and enabled VR_MOVIE.VRO Becomes playable. 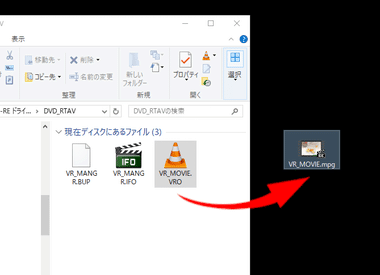 On a DVD disc VR_MOVIE.VRO To the desktop etc. and change the file extension .VRO から . Mpg If you change it to, you can use it as a versatile MPEG2 file.

DVDFab PassKey for Blu-ray UHD Friendly drive By using, even on a PC that does not meet the playback environment UHD BD Will be able to watch.

Not available on DVDFab Passkey Lite. 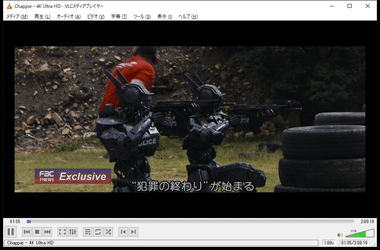 As long as you use a supported drive, it works just like a DVD or Blu-ray, and once the analysis is complete, you can play it on a media player such as VLC or MPC.

HandBrake , XMedia Recode However, the current version recognizes 4K UHD BD, so ripping is possible when used in combination with DVDFab PassKey Blu-ray.

Blu-ray region code is the same in Japan and North America A However, it cannot be played because it recognizes the country.

With media players such as Power DVD that can play Blu-ray even on a computer The contents and features of this disc are licensed for sale and viewing only in the United States and Canada.The contents of this disc cannot be used in this country. Is displayed and cannot be played. 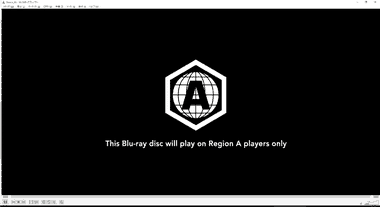 Redfox AnyDVD HD Even if is enabled, a region code warning will appear and playback will not be possible. 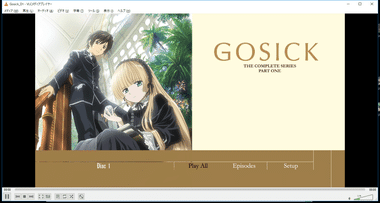 DVDFab Passkey for Blu-ray can play North American Blu-ray without any problem.HandBrake It is also possible to rip with.

North American Blu-ray is not only Passkey for BD DVDFab Blu-ray Copy/ Blu-ray rippingBut it can be recognized.

Blu-ray Players Region Is an additional feature implemented by DVDFab PassKey.power dvd , WinDVD You can reset the region code of a paid media player to make it multi-region.

Blu-ray player region Is effective when you want to import and play Blu-rays distributed in Europe and China, and it is enabled by default.

Normally, BD cannot be played unless the media and player region codes match. 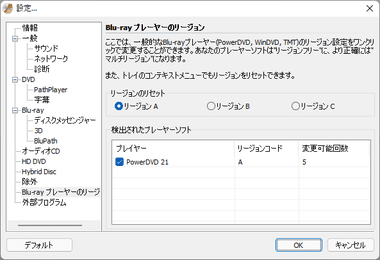 From the context menu of DVDFab PassKey Blu-ray player region Of Advanced Setting You can see the detected player name and the reset region.

An error may occur due to an illegal operation or failure to release protection.

When an error occurs Bug report Dialog box is displayed, and when you click "Send", the information when the error occurred is sent.

DVDFab PassKey has a non-expiring license and can be permanently updated Indefinite edition And the license has an expiration date Subscription version Is provided and the subscription version will be automatically renewed Cancellation procedureIf you do not, you will be billed regularly. 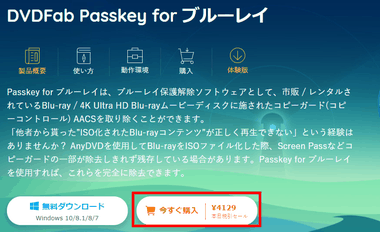 If you want to use both DVD and BD, we recommend the indefinite version of the bundle sale. 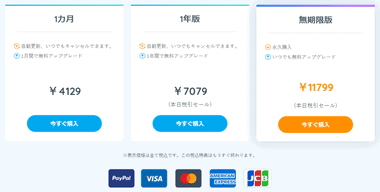 Click "Buy Now" for the plan you want to purchase, proceed to the purchase procedure, register as a DVDFab member after making a payment with a credit card or Bitcoin, and activate the product with the registered email address and password.

The indefinite version may be on sale Campaign page confirm.

Online account verification was introduced in version 2019. 10, which was updated on October 18, 9. 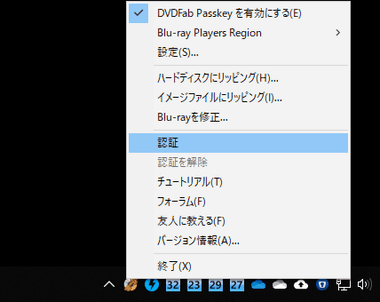 Expand the context menu from the DVDFab PassKey icon in the system tray Authentication choose. 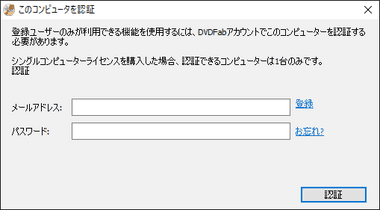