Fileless attacks are attacks that do not have executable files such as malware and use the standard Windows scripting language Powershell, etc., and target companies and the like. Targeted attack Is increasing.

Malware can be broadly divided into four forms: traditionally running standalone and downloading programs from an attacker-prepared server. Downloader Multi-stage type that installs various malicious programs in the PC by Sequential malware Is increasing.

ウ イ ル ス
Like a virus that infects living organisms, it cannot multiply by itself and parasitizes (alters) other cells (programs) to act.

worm
It is self-propagating by acting alone without the need for other programs.

Trojan horse
An attacker can control a computer on which the program is installed by disguising it as free software and prompting the installation.

Spyware
A program that sends information inside a computer to the outside.

Malware Viruses, worms, Trojans, spyware It has one or more of the features.

Computer viruses in the narrow sense are programs that cannot self-proliferate and have been on the decline in recent years.

Malware belonging to a virus type that exploits "macro" implemented in Microsoft Office Word and Excel.
Malicious code is executed when you open Word or Excel and enable macros. Primitive malware is sent as an email attachment.

Unlike the macro virus, it is not a macro function but a virus that is built into document files such as Word / Excel / Power Point and PDF. It is infected by opening the file, clicking the image icon in the document, and executing a PowerPoint slide show.

Trojan horse Is a type of malware that invades a computer by disguising it as an application, and when infected, it is a threat that can take over control of the computer or the entire security system.
Users themselves become infected by downloading and executing disguised Trojan horses from websites, SNS/email URLs, etc.

In recent years, attacks by Trojan horses have increased. 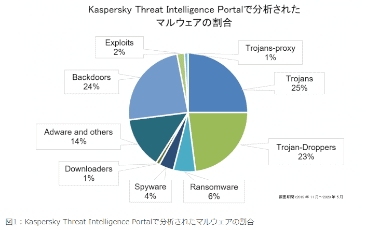 back door Is a mechanism that bypasses the normal authentication path and breaks into the computer.Trojan horseIn addition to being installed as a software, it may be intentionally incorporated into firmware, etc., and if a backdoor is installed, an attacker can perform unauthorized access and malware transfer work.

DropperAs a Trojan horse, it invades a computer by disguising itself as utility software and executes a malicious program inside the dropper, or automatically executes a download process to download malware.

The dropper itself does not contain malicious code, or it has the feature of avoiding the detection of security software by encrypting the malicious code.

Trojan downloader The Dropper Another name for the type that runs the download process in.
It is a threat that invades a computer as a Trojan horse and downloads malware, which has been increasing in recent years.  Sequential malware Used in.

Everything I did with the keyboard Record keystrokesAlthough the keylogger itself is not a Trojan horse, it is often incorporated into Trojan horses as a means of stealing user login information.

ScarewareIs a general term for malware that arouses user anxiety and is infected as a Trojan horse or virus.

The infected computer is completely locked and a ransom is requested on condition that the data stored in the computer is restored.

The website you are browsing is prompted to install a disguised security app with a pop-up display that seems to be infected with a virus, and if you install the app, you will need to purchase a paid version to remove the fake virus, and personal information and credits Card information is stolen.

Adware is a program that displays advertisements and is less harmful than other threats, but there are some annoying ones such as displaying a large amount of advertisements including pornography, and some threats have the nature of spyware.

Traditionally, browser hijackers were bundled with free software installers, but now they are provided as browser extensions (add-ons / plugins) and are often installed by users themselves, just like Trojan horses.

Fishing (Phishing) is a fraudulent activity that steals login information, credit card information, etc. It is common to lead people to websites designed to imitate mail order sites or financial company websites and have them fill out fake forms. 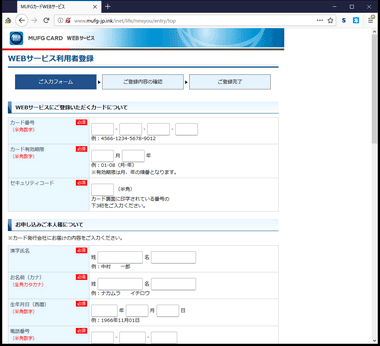 Traffic is unencrypted on modern phishing sites http Although there are differences such as the use of, the number of items that are so precisely made that they are indistinguishable from the real thing is increasing when looking only at the design.

Pharming rewrites DNS settings and HOST files to direct users to fake sites, and even links displayed in bookmarks and search results are redirected to fake sites, making them difficult for users to notice and vulnerable to damage.

Spam is a nuisance that indiscriminately sends a large number of messages to e-mails and SNS, and is mainly used for advertising and promotion. 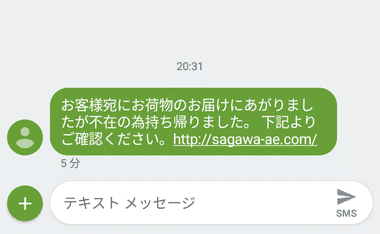 Some spam leads to phishing sites Spoofing There is also.

A rootkit is a set of malware required for an attacker to remotely control an attacked computer. When a trojan horse or the like breaks into the computer, it hides itself and avoids detection by security apps, and is used for keyloggers and backdoors. Installation, falsification of the system, extraction of confidential information, concealment of harmful codes, etc. are performed, making it difficult to notice the infection and the damage tends to spread.

Crime wear The For criminal activity A general term for malware that has been used.

Exploits are malware that exploits OS and software vulnerabilities (security holes) to attack, and exploits unknown vulnerabilities. Zero-day attack Is a big threat that can cause enormous damage.

There are various attack routes such as Trojan horses, email attachments, and access to tampered websites. When attacked, unauthorized access and execution of malicious programs become possible.

Bot Is a malware that allows an infected computer to be remotely controlled from the outside via a network, and is infected by Trojan horses, email attachments, and access to tampered websites.

A botnet is a network of bots that can be used for large-scale attacks such as DDoS by commanding a large number of zombied computers from a bot master such as a C & C (Command and Control) server that controls the bot. do.

It sends huge amounts of traffic from many computers to one server, consuming server resources and bringing down the system, or disabling security features to allow data to be stolen by businesses and government agencies. Easy to be targeted.

Basic knowledge you should know before using free software As smartphones have become widespread and mobile apps can be monetized by collecting advertisements and personal information, the current free software running on Windows is open source [… ]

Copyright law and illegality of ripping and capture

Illegalness such as DVD / BD copy ripping and video download Article 30 of Japanese copyright law allows copying of copyrighted works for private use, but at the same time prohibits the avoidance of technical protection measures. So use the app to DV […]

An app that can remove copy protection for DVD / Blu-ray DVD and Blu-ray access control and removal of copy protection are illegal acts that violate the evasion of technical protection measures under Article 30 of the Copyright Law, but copy […]