A virtual private network (VPN) connects to the Internet by creating a tunnel called encryption, which ensures privacy protection by ensuring communication security and anonymization of IP addresses.

Communication security was a problem with HTTP connections, with HTTPS traffic exceeding 2017% in 90 as Google promoted HTTPS to encrypt communication between web browsers and servers. Man-in-the-middle attack The risk of eavesdropping due to (Man-in-the-middle attack) has been greatly reduced, but the Wi-Fi free spot that has increased due to the spread of smartphones is due to Wi-Fi hackers. Eavesdropping , Spoofing Are exposed to the risk of. 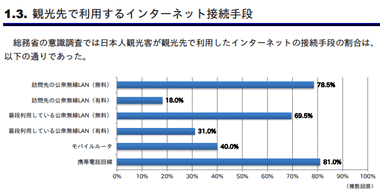 There are many opportunities to use free spots Many smartphone apps do not have encrypted communication, and IPA (Information-technology Promotion Agency) also recommends the use of VPN services to protect the communication content.
Three out of four Japanese tourists use the free WiFi they visit.

By using the VPN service Communication is protected by encryption and tunnelingFor Eavesdropping Can be prevented.

To the internet ISP You connect through (Internet service provider), but when you use the VPN service, the connection destination via the ISP becomes the VPN server, and the communication between the VPN server and the user is encrypted. The ISP only has logs that connect to the VPN server.

The ISP keeps a log of communications that have passed through the ISP's network, and when a request for disclosure of personal information based on legal grounds such as a court warrant is approved, the name and address of the contractor from the IP address that accessed the server. Etc. are disclosed.

In Japan, privacy is protected, Article 4, Paragraph 1 of the Telecommunications Business Law. Communication secret There is The right to prevent the content and destination of communication from being known or leaked to a third party Is guaranteed,Obtain the consent of the person Or Justice-Legitimate defense-Emergency evacuation Corresponds to Infringement of confidentiality of communications is permitted only when there is a reason for illegal deterrence..
The ISP has a function as a censorship that can monitor the communication contents of users and operate without permission. Reasons for illegal deterrence If it is confirmed, the communication will be blocked by the DNS server or dedicated device in the ISP's network when the communication passes through the ISP. ブ ロ ッ キ ン グ In April 2018, the government requested ISPs to block the three sites of Manga Village, Anitube, and Miomio, and the police agency and others have restricted access to sites related to child pornography.

Edward Snowden NSA According to (National Security Agency)International surveillance network By revealing the existence of (PRISM), an urban legendary public institution SIGGINT There is a growing sense of caution about (interception of communications), and an increasing number of people are taking privacy protection measures even at the individual level.

Five Eyes, including the United States and the United Kingdom, collaborate with Japan, Germany and France Cyber ​​attacks, sharing confidential information in China

A framework that includes Japan, Germany, South Korea, and France in Faiz Eyes to share information on China's cyber attacks in 2019 5 Eyes Alliance + Was launched.
Faiz eyesIs a secret agreement on intelligence signed between the United States and the United Kingdom during World War II UKUSA Agreement Is based on, and after World War II, Canada, Australia, and New Zealand joined to collect, analyze, and share information domestically and internationally.

Since many VPN providers have servers installed in various countries around the world, it is possible to access sites that do not accept connections from overseas by connecting to the VPN server in the target country.

VPN is a useful service for communication security and privacy protection, but VPN providers can collect user traffic information like ISPs, and the reliability of VPN providers is important.

Many VPN providers do not use a no-log policy, especially for free mobile VPN apps that use user activity as advertising and traffic analysis data or collect data in their privacy policy. There are services that are not worthy of trust, such as the usage of is not described.

Auditing from a third party ensures security when selecting a VPN provider.

In the VPN service, it is common to use the encrypted DNS server provided by the VPN provider, and the IP address of the access source is not visible, but the IP address that should not be visible is visible. DNS leak Called (DNS leak). 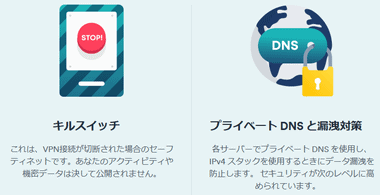 When the connection to the encrypted DNS server is lost, the DNS query is forwarded to the DNS server of the unencrypted ISP to maintain communication, so the VPN service forcibly shuts down the network. Kill switch It implements a feature to prevent DNS leaks.

Even a provider that adopts a no-log policy may be legally forced by a public institution to monitor a specific IP address or log an account, and the provider's location is also an indicator when selecting a service.

Warrant canary Indicates that a company that handles personal information, such as a VPN provider, has not received a data submission request from a public institution.

Warrant canary It has no legal basis and is not a guarantee of security, but it is an indicator of privacy protection.

On the VPN provider's site IP address checker-DNS leak test-WebRTC leak test Etc. are installed, and when you access it Leaking Is displayed.

The tools installed on the site All access from environments other than your own VPN service is leaked Is displayed, so it is not credible at all.

Check for DNS leaks by visiting the test site, not the provider's site. 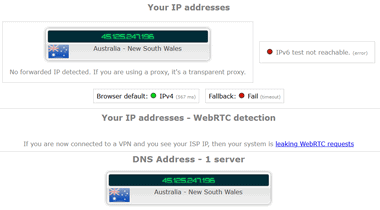 IP Leak.net , this means a Your IP address と DNS Address If is the same IP address and the country of the connected VPN server is displayed, there is no DNS leak. 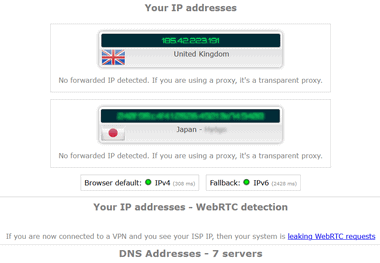 If there is a DNS leak, the DNS server is different from the connected server, such as in Japan.

Check the communication speed by connecting to the fastest server with the VPN app.

Make sure that there is no significant slowdown by measuring with and without VPN connection.

In recent years, VPN providers have been integrated through acquisitions, but there are many cases where the actual situation of the parent company and operations is unclear.

Kape Technologies The predecessor of developed a browser extension Crossrider The program was notorious for being used by malware, and Teddy Sagi was also convicted of bribery and fraud in the past, threatening the security of the acquired VPN service. but, Crossrider Renewed its management team in 2016 and converted from a program development company to a cyber security company, and the acquired VPN provider is also operating independently.

Many VPN services offer affiliate programs, and some VPN comparison sites and ranking sites focus on profits, while others are set up by group companies of VPN providers.

VPN providers that are not audited by a third party have opaque data processing and are actually experiencing problems.

Should have adopted the 2017 nolog policy PureVPN Helped identify users by submitting network logs (records of users connecting to PureVPN) at the request of the US FBI.
PureVPN explains that the submitted network log is automatically generated for troubleshooting etc. and that the user's activity is not saved. No logs policy The reliability of the was greatly impaired.
In 2018 PureVPN revised its privacy policy, US Information Systems Auditor Altius IT It is more zero log certified and is currently unable to identify an individual from the user's active log.

Israeli software vendor acquired by Facebook Onavo Was offering a free VPN app Onavo Protect Analyzing the traffic sent using the VPN app reveals that Facebook was using it for sales strategies such as acquisitions, which became a big problem and let us know that the VPN app can act as spyware. rice field.
Onavo Protect Has been removed from the Google Play store.

Israeli software vendor Hello Was offered by Hola VPN Now, let ’s take a look at the user ’s device. Exit node It was discovered that it was being used as (the IP that eventually accessed the server), and VPN users were selling bandwidth for $ 1 per GB.

When used for crime as an exit node Computer remote control incident There is a possibility of being arrested as a suspect of a crime that I do not remember at all.

Installing and using Dropbox for Gmail

Gmail extension Dropbox for Gmail is an add-on for Gmail provided by Dropbox, and Gmail […]

What to do when computer virus infection is suspected for free and basic knowledge of malware The two major functions of security software are antivirus and firewall, and antivirus mainly performs prevention, quarantine, and removal, and phi […]